— A Great Bunny Owner is an Informed One — 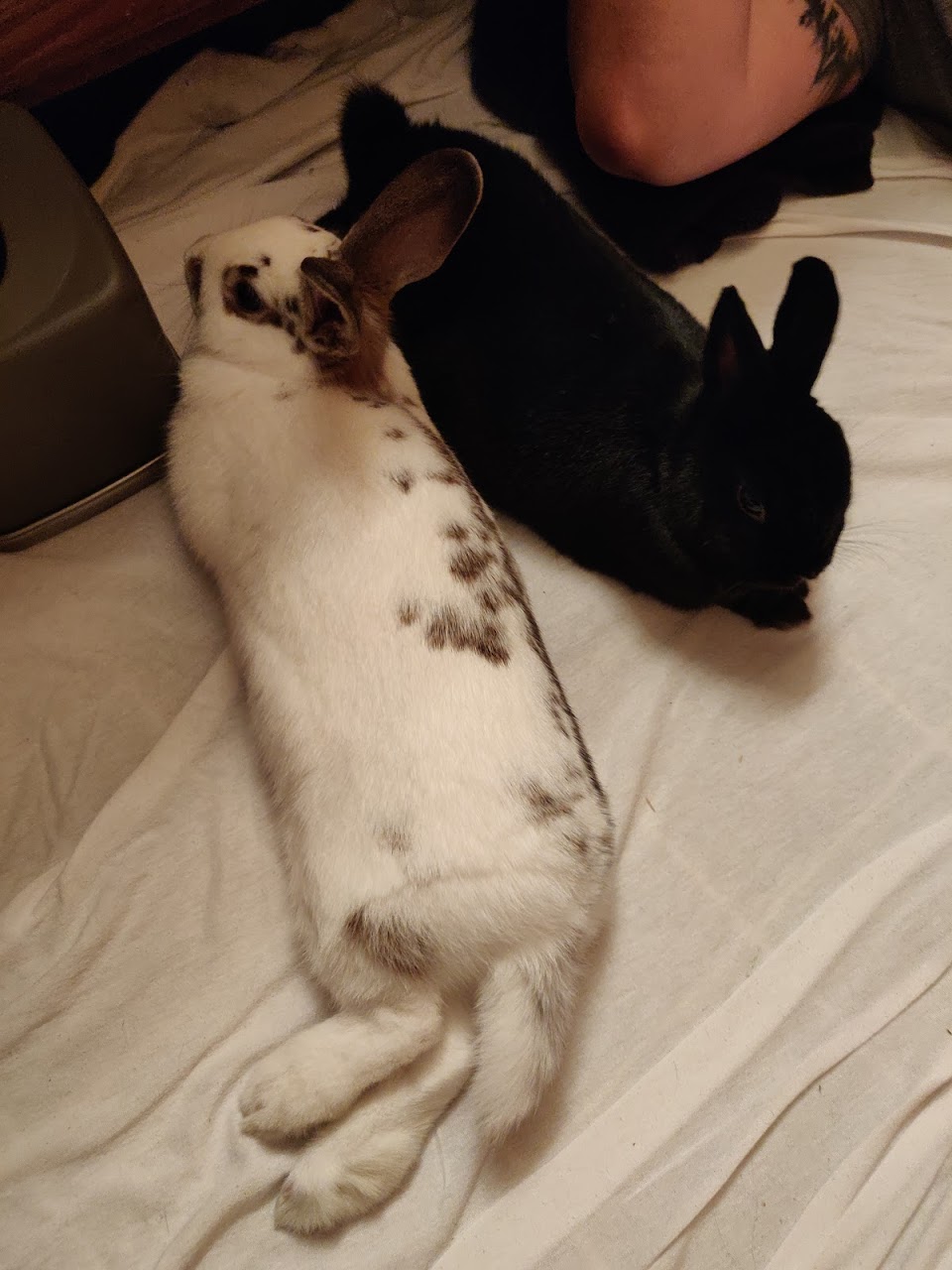 Whenever I was first thinking about adopting bunnies, I always found listening to stories from other rabbit owners to be incredibly helpful, so I thought for this week, I would share a little bit about my own experiences of owning two house bunnies.

So without further ado, here’s a day in the life of a bunny owner!

In the morning when I wake up, my two bunnies are usually going to sleep for the day, so I make sure to grab them some breakfast (or dinner for them) before they hit the hay. Breakfast of choice is usually their hay pellets, which I give them a smaller amount than most pet owners because my English Spot, Millie, has a bit of a sensitive tummy and can’t have too much pellets. Even though Millie and Prince Ali are bonded, which mean they live in the same pen and share just about everything, Millie is a bit of a piggy, so I have to make sure to put their food into separate bowls so that she won’t eat all of Prince Ali’s food.

After they have had their breakfast, I fill up their water bowls (two large bowls since they both drink a lot of water), fill up their hay tower and put hay in their litter boxes. After this, they are good to go for the rest of the day and are ready for bed-time.

I work all afternoon and into the night, but the rabbits are both asleep during this time anyways, so I know I’m not missing much when I’m away from home. Rabbits love to sleep under the cover of something (it’s a prey thing) so I cut holes into a few cardboard boxes for them to hide away in. They both usually go into the same box to cuddle while sleeping. It’s a sight that warms this momma’s heart!

Night time is when things always pick up. I usually get home around 10pm from my job and by the time I destress and get out of my work clothes, the bunnies are ready for their dinner.

I let the rabbits out of their play pen whenever I’m home and let them have a run of the house while I supervise them. Some owner let their rabbits free roam 24/7 but both my rabbits have a tendency to get into stuff, so for their safety, I watch over them every time they are out of their pen.

For dinner, I usually have a salad put together for them and put it on a bit plate for the both of them to share. This is a great time for them to bond over a meal. After they finished their food, it’s play time! Since Millie is an active breed, I try to have them out at least 2 hours a day for her to stretch her legs. Rabbits that do not get enough exercise and time out of their pen may become destructive or depressed, which can lead to them refusing to eat. It’s really important for a bunny’s physical and mental health to have some time out each day.

While they’re out, I put together some scavenger hunts around the house using treats. I also make sure cardboard houses for them to run through and jump on. Sometimes they’ll come up for pets and snuggles and then scurry away to play again. After running around, they usually tire themselves out and end the night with some cuddle sessions with eachother.

After playtime is over, they’re put up in the pen for the night and we start the cycle again the next day!