Since Thanksgiving is coming up, I thought it would be nice to place a train representing Wisconsin, where I was born. Surprisingly, there are only four electric trains built-in 1916 to 1919, Milwaukee Road class ES-2. They were of steeple cab design, with a single roof-mounted pantograph to access Milwaukee’s 3,000 V DC overhead line. This train has a weird parallel built and sadly has been scrapped, all four of them. “Despite their highly specialized niche on the Milwaukee Road, the ES-2s were well-liked by personnel. Engineers liked them due to their rapid throttle response, preferring them over diesels which were slower to transition and accelerate. Their simple nature made them easy to service, and the units seldom needed major attention. Few changes were made to them over the years, the most important of which was the addition of extra steel plates, which added weight and reduced wheel slip.” I did a project on this train years ago in my COMM 110 class, introduction to speeches. It sad to say its gone, “their age and the inadequate workmanship (motor armatures in particular tend to come apart) combined with the rough ride over the steadily deteriorating track have lead to numerous failures. Simply put, they are pretty well obsolete, and are slated for retirement shortly” It was fascinating and fascinating to learn about because it is such an interesting-looking train. I recommend looking at more pictures and searching for more videos about that rain. It is not easy to find the train since they were all scrapped and only four got built.

Hello everyone, welcome back to my blog post; this week, we will be discussing a super fascinating train. We will be introducing the fastest train globally, the SCMaglev L0 series. The L0 series uses SCMaglev, a futuristic magnetic levitation system that uses powerful magnetic forces for all aspects of the operation—acceleration, deceleration, guidance, and levitation—resulting in over 300 miles per hour operating speeds in everyday service and travel times, unlike anything traditional trains can achieve. The way this train works is absolutely fascinating but overly detailed, so I will provide a link to watch and read. A fun fact is that there are a ton of marches like this, and many are produced in the eastern side of the world, mainly in parts of Asia. L0 series is a fascinating train that has hit the highest speed train can reach, over 375mph. “The first L0 series vehicle was delivered to the Yamanashi Maglev Test Line and unveiled to the press in November 2012. The first five vehicles were linked up and placed on the guideway in June 2013.” a fun fact about these trains are rather than riding directly on standard steel railroad tracks, SCMAGLEV trains levitate between the walls of a unique concrete structure known as a guideway. The U-shaped guideway has walls surrounding the trains on both sides, making the system free from the derailment. That is it for this week, and I hope everyone enjoys their break and has a really good thanksgiving. maybe you can ride the train while having your meal. 🙂

Today’s new post will be about a new train and one of the latest train games out in the world. The British class 03 locomotive is widespread and gets seen in many games and parts of Britain. The British Rail Class 03 locomotive was one of the British Rail’s most successful 0-6-0 diesel-mechanical shunters and similar Class 04. The Class 03, like other shunters of this size, was built for light duties where a giant locomotive was not needed, particularly for shunting at locomotive and carriage depots and as station pilots, or where larger or heavier locomotives could not get used. Moving on from the train, we can discuss the new train game, train sim world. Which also has released the second version of the game, train sim world two. Train Sim World is an immersive first-person simulator perfect for everyone, with complete in-cab interactivity, accurate detail on locos, real-world routes, and hours of gameplay. Thus, it is the only game I haven’t played because it gets made y the same creators of Train simulator. This game is supposed to have better graphics with a cleaner and defined look. In the future, once I have to money to buy the game when I want to, I would like to buy this game as it looks graphically insane and looks super realistic. It is a very well-presented game from the environment and scenery and got started by a Kickstarter. Many train enthusiasts and gamers pitched in to help make the game come to life, and it is impressive to watch. I hope everyone has a good weekend, and remember to watch the new video, photo and check out the pages.

Hey everyone, welcome back to my blog. I have some exciting things for everyone to learn about this week. First off, we will learn more about some fantastic diesel trains, M-497. This trains look super spectacular and look like a train with two turbo engines one top. This train is one of a kind. There is only of its kind. Sadly, this train is no longer with has-beens, and we scrapped. If you would like to see a little demonstration of how trains get scrapped, here is a video. Something fascinating about this train is that it is jet-powered and has two k47-19 engines attached to the front top of the train. For our first piece of media is Thomas the train. It sounds super childish and cliche, but I grew up with Thomas the train. It has always been a significant childhood memory of mine and has become why I love parades today. The show is exciting and saddening to read about. You learn about the death and mistake of “trains” and how they grow and move on. I also find it fun because you can import the custom content of Thomas the train into the trains simulator and Trainz simulator and drive the trains to from the various shows. Nonetheless, Thomas, the train stems from the railway series, a series of books written by the Reverend W. Awdry, who he read to his son, who later started writing more of his father’s books. If you are not into Thomas the train, I would recommend reading the conspiracy theories and creepypastas of Thomas the train, and they are enjoyable ready. Till then, please watch and look at the train of the week and have a traintastic weekend.

Train of the week 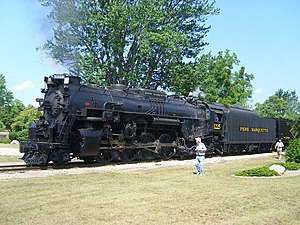 Video of the week