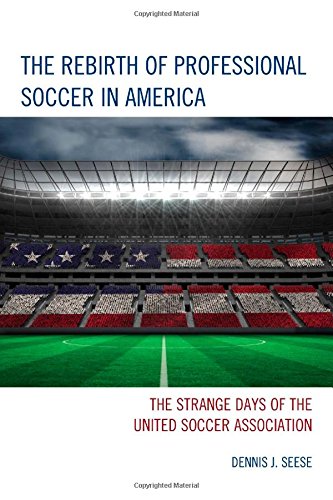 The Rebirth of Professional Soccer in America:
the strange days of the united soccer association
by Dennis J. Seese
GV 944 .U5 S44 2015 New Arrivals, 2nd floor

In light of the recent victory of the U.S. Women’s National Team in the World Cup and the U.S. Men’s National Team playing in the CONCACAF Gold Cup, it only seems appropriate to reflect on soccer and its tumultuous history in the United States. Seese’s book covers a revival of soccer in the United States that occurred in the late 1960s. This revival is remembered less for its passion of the sport, and more for a bitter rivalry between opposing factions. While capitalizing upon a rise in interest in soccer, two different leagues the United Soccer Association (USA) and the National Professional Soccer League (NPSL) had different approaches to promoting the sport that ultimately separated fans rather than joining together to build a base. Seese’s book goes in depth to examine the history behind this rise in soccer popularity. This book focuses on events that happened almost exclusively in 1967 and show the quick rise and fall that was professional soccer in the United States. This book will be of great interest to young soccer fans who may be unaware of the history of U.S. Soccer prior to the foundation of the MLS in the mid-1990s.