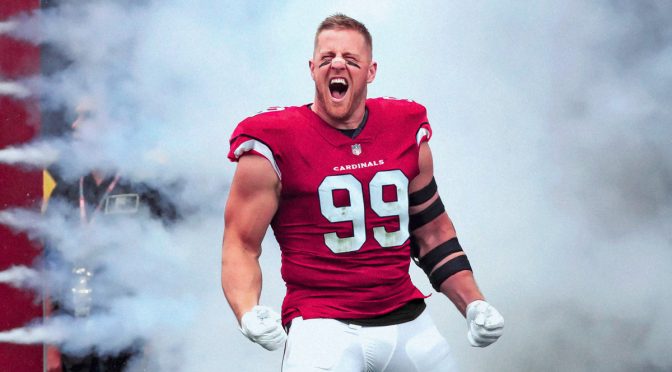 After spending his entire career with the Houston Texans (10 seasons), NFL superstar J.J. Watt requested to be released from the team. The Texans agreed and parted ways with him. J.J. Watt is one of the greatest NFL players of all time. There was a lot of talk about which team he would eventually sign with this offseason. A lot of teams showed interest in signing Watt. Some of those teams were the Green Bay Packers, the Pittsburg Steelers, the Cleveland Browns, the Buffalo Bills, and the Tennessee Titans. These five teams were the most likely to sign Watt, and all five of these teams made the playoffs this past season. J.J. could fit in with all of these teams. But the Packers and the Steelers would have been a more personal fit for Watt. Watt was born in Wisconsin, grew up as a Packers fan, and he played for the Wisconsin Badgers. So it would have been really cool to see J.J. play for the Packers. If Watt decided to sign with the Steelers he would be playing alongside both of his brothers, Derek and T.J.. Three brothers together on one team would be pretty special.

But J.J. Watt shocked the sports world by signing with the Arizona Cardinals. He signed a two-year contract worth 28 million dollars, and 23 million of it is guaranteed. The Cardinals were not even a team that was mentioned for signing Watt. It is definitely an interesting choice for Watt though. Arizona’s defense was ranked 13th out of 32 teams this past season, which is not bad. They have a great offense that was ranked 6th in the NFL, and Kyler Murray is a really good young quarterback for them. Also J.J. has now been reunited with star wide receiver and former Texans player DeAndre Hopkins. Arizona had an 8-8 record last season, and I think they will have a better record this upcoming season. I believe that they can make the playoffs this season. J.J. Watt will help improve this team, and it will be fun to watch him play for the Cardinals this year.