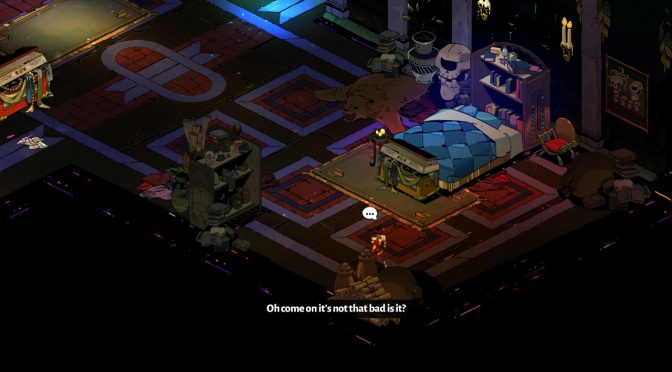 Over the past week, I have been enjoying Supergiant’s latest game Hades on my Nintendo Switch. It is a Roguelike, a genre I covered in my last post about Rogue. I should note, this is not a full-fledged review of the game. I have not beat Hades yet, however, I wanted to share my initial thoughts on it.

Hades is the story of Prince Zagreus, one of the many progeny of Hades himself. Zagreus one night (relative to time in the Underworld) decides to go through his father’s documents, hoping to find anything at all about himself. He ends up learning of his true mother, Persephone. Determined to find her in the surface world, Zagreus begins his journey of multiple attempts to escape the Underworld.

As such, you aren’t expected to finish Hades in one run. You will die multiple times, and I mean MULTIPLE times. So get ready to hone your skills if you wish to aid Zagreus in his escape from the Underworld.

In Hades, your goal is to make it as far as possible through Tartarus and escape the Underworld. Along the way, you will receive help from Zagreus’ Olympian relatives. They will give you different power-ups and effects for your skills. However, upon death you lose any and all of these power-ups. Essentially, you start from scratch after each time you die. Certain elements of the game are permanent, though, like weapons and other effects. My favorite weapon so far is the Aegis Shield.

Ultimately, combat can be pretty simple at times to downright frantic. Some early chambers will feature fewer enemies while later chambers will throw waves of them at you. For this, a bit of advice from the character Hypnos, “Dash like mad.” Dashing lets you evade most attacks. Depending on certain power-ups, your dashes can deal damage themselves.

Other than that, the characters are pretty entertaining and well-written so far. My personal favorite side character is Nyx, Queen of the Night. The soundtrack is also fitting and a blast to listen to while fighting off hordes of Underworld denizens.

Hades is a great spin on the Roguelike genre. It offers hours of content and replay value. I look forward to playing more of Hades in the future. Have any of you played Hades yet? Let me know what you think in the comments! As always my fellow nerds, until next time, peace.

One thought on “Indie Spotlight: To Hell And Back With Hades”