Sara Paretsky, author of 17 V. I. Warshawski novels (and several other fiction and nonfiction works), is well-known in the mystery and detective genres for her hard-boiled female private investigator, a character type that has traditionally been male. Warshawski may be sexy and dress well, but those are not her only attributes. She is a strong, competent, cynical, gritty, and yet funny woman who does not fall into the pit of feminine tropes. Warshawski primarily, but not exclusively, investigates financial crime, a milieu Paretsky is familiar with from a previous career.

Want to see what Paretsky has to say about these novels, check out this video: Kirkus TV Interview with New York Times Bestselling Author Sara Paretsky. 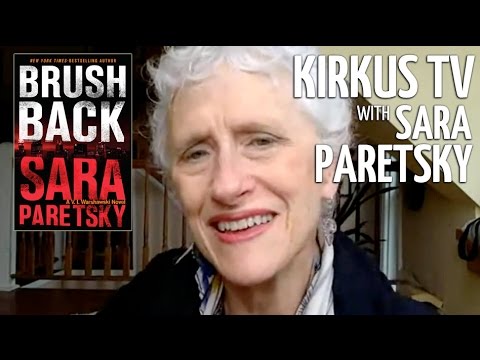 Why else should you read her? For one, the primary setting is one of our near by metropoli, Chicago. Paretsky mentions real streets there that you may have visited. This spring in fact I was on Milwaukee Avenue, where Warshawski’s office is located in later books. Another point is that her novels draw you in from the first chapter, the fast pace keeps you reading, while the intricate plot will keep you absorbed. Perfect for a few lazy summer evenings. Lastly, you grow to love (or hate) the three dimensional characters. I truly think that if you are a mystery and detective fiction fan you will enjoy her immensely.

For her V. I. Warshawski novels, Paretsky’s won the Crime Writers’ Association Silver Dagger for Blood Shot, a Cartier Diamond Dagger Award for lifetime achievement in 2002, and a Gold Dagger for Blacklist. She was also awarded the Mystery Writers of America Edgar Grand Master Award in 2011.

This is a list of V. I. Warshawski novels with links to information about them and their locations in the Andersen Library. Titles without links can be borrowed using UW Request from other UW System libraries.

Do you prefer movies? Check out Kathleen Turner’s portrayal of the detective in the 1991 film V. I. Warshawski.

Martha is a Reference & Instruction Librarian and the liaison to the Biological Sciences, Computer Science, Languages and Literatures, Mathematics, and Physics Departments
View all posts by Martha →
This entry was posted in summer reading and tagged detective novels, mystery novels, sara paretsky, v i warshawski. Bookmark the permalink.