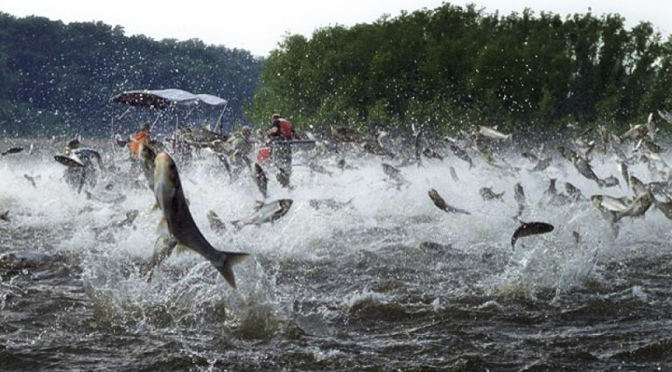 Lake Michigan is the only Great Lake located entirely within the United States borders, but especially with the entire East coast of Wisconsin. The lake is home to many different species from the animal kingdom like fish and birds but is also home to a variety of invasive species as well including the zebra mussel and the Asian carp. Zebra mussels, originating from the Caspian Sea, are causing a wide array of damage to the ecosystem both directly and indirectly. For starters, zebra mussels are known to coat pipes that lead to drinking water treatment plants and make their home within those pipes. This can lead to more money needing to be put into these plants in order to keep them functional and operational as Lake Michigan is a great source of drinking water for the entire community. The invasive species also have a habit of killing the native mussel population just due to their reproductive nature. Native mussels may take 3-5 years to fully mature and develop while zebra mussels only take a matter of one year which allows them to spread faster and deplete natural resources from the native species.

While originally not considered viable to survive in Lake Michigan, the Asian carp, arriving from Southeast China, has proved that it can be devastating for the long-term sustainability of the lake’s ecosystem. While the zebra mussel has many damaging implications towards human culture the carp can do monumental damage towards other fish within the waters such as walleye, yellow perch, and whitefish. Since the Asian carp has such a flexible diet consisting of anything from plankton to the feces of invasive mussels such as the zebra mussel. With few natural predictors, there’s no telling how out of control these invasive populations will get without spreading awareness and allocating resources towards saving one of Earth’s greatest ecosystems.