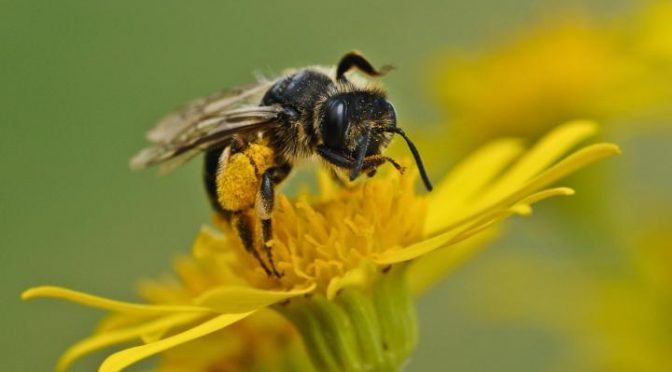 If you haven’t figured it out by the title, we will be talking about native bees and how they are being affected by pollutants of all sorts. As many of you have already heard, bees are having a particularly hard time as of late when it comes to surviving and reproducing.  This is a problem that can be seen throughout the United States, but today we will be talking about native bee populations pertaining to Wisconsin.  Native bees play an essential role in Wisconsin’s agricultural community and without them could really hurt the crop output with certain crops that require fertilization by the transferring of pollen from one plant to another. As a matter of fact, 70% of angiosperm plants rely on insect pollination. The word angiosperm refers to plants that produce a flower; which includes, all fruit’s, rice, wheat, acorns, beans, and corn.  Some of those plants like corn, wheat, and soybeans can either be self-pollinated or be helped by the wind in fertilization.  When it comes to Wisconsin’s Orchardist’s and their crops of apples, cranberries, and cherries etc. many of them should be worried.  When it comes to ecosystems, many of them rely on the native bee populations because their larvae and the plants they pollinate provide food for a variety of wildlife.