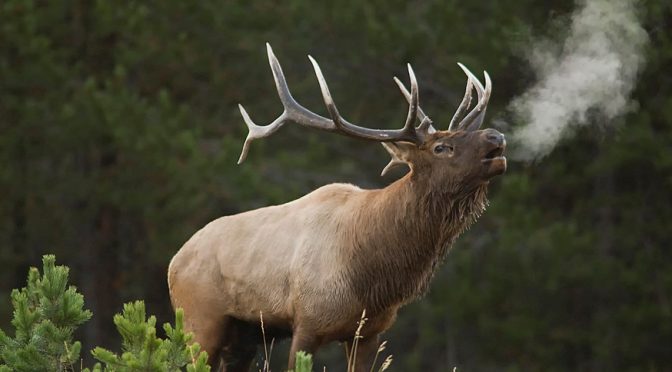 For those who don’t know what a bugle is, it is something that must be heard in order to really understand the beauty of such a call.  A bugle is a sound produced by a bull elk used for asserting their dominance and locating other bulls to potentially steal their potential mates. Bugling only really occurs during their mating season, something that only occurs during the months of September and October. I myself have never heard such a coveted sound except for on YouTube, but recently according to the WI DNR the current elk herd in Wisconsin is around 400 elk.  When I first heard this my initial reactions were a reaction comprised of surprise and bewilderment, mostly because I had no idea we actually had a viable elk population in Wisconsin at all. This is mostly due to a relationship created in 1995 between the WI DNR and The Rocky Mountain Elk Foundation that helped to reintroduce 25 elk at the time in the Clam Lake Region in Wisconsin.  Throughout recent years more elk have been introduced into other northern regions across Wisconsin and it has proven to be a success.  Currently, in the Clam Lake region, it’s population of elk is around 185 elk.

These methods of reintroduction have proven to be so successful that in 2018 Wisconsin held it’s first-ever elk hunt, which allowed 10 lucky hunters to harvest a mature bull. The hunt turned out to be a success and was held in 2019 and are currently applications for the upcoming 2020 hunt.  If you are interested in applying the application fee is $10 and if you lucky enough to get picked out of the raffle the license fee is currently $49.  In addition to that if you get picked you must complete a mandatory elk hunter orientation.  If you ask me if this is worth it, I would 100% of the time say yes.  I always wanted to hear a bull elk bugle or see them in the wild and Wisconsin is becoming one of those places two do both of those things.

3 thoughts on “Bugles Continue to Spread in northern WI”