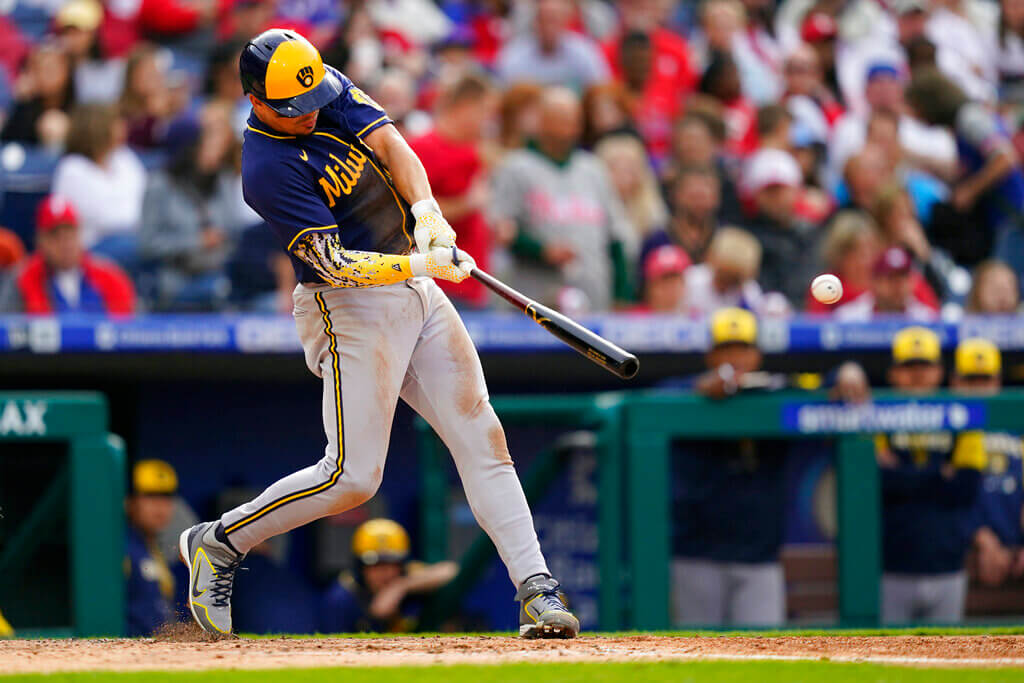 The Milwaukee Brewers were 8-6 heading into Saturday’s game versus the Philadelphia Phillies. This was an exciting matchup as both teams have dominated baseball throughout the last decade and were playing together in this elite matchup. The Philadelphia Phillies had their ace on the mound, Zack Wheeler, as he faced up against Brewers starter Adrian Houser. This matchup consisted of a shaky start for both pitchers, a wild fifth inning, and a hit that changed the ballgame completely. These three aspects within the ballgame proved to be quite the performance for the Milwaukee Brewers, and was very entertaining to watch.

Saturday’s game was very entertaining and provided a rollercoaster of emotions for fans watching this ballgame. Whether it was being upset by the fact that Milwaukee was allowing many runs early on, or the fact that Milwaukee came back from all odds and won the ballgame, it set forth an incredible game to watch. Thus far, this game has been one of my personal favorite games and would recommend watching highlights of the game to understand the significance of these moments. This matchup possessed poor starting pitching for both pitchers, an incredible offensive inning, and a dominant close out to end and win the ballgame. 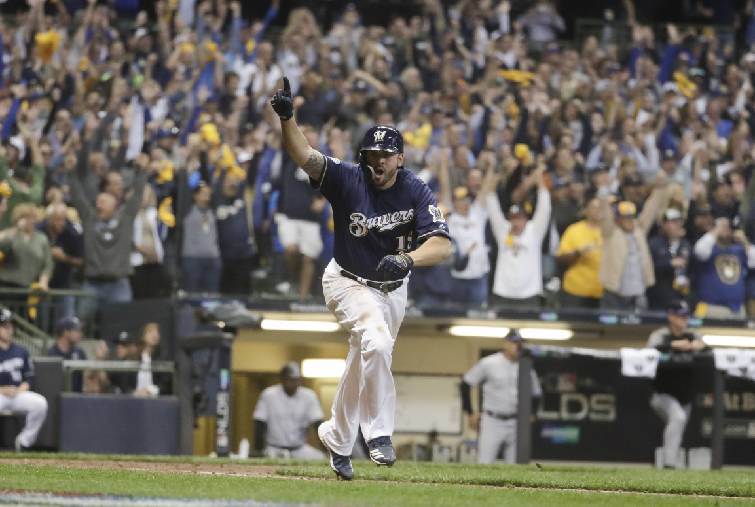 The 2018 season was remarkable in many aspects and is memorable for all Brewers fans. While they didn’t quite achieve the goal of winning a World Series, they were able to make it to game seven of the NLCS which is incredibly impressive. Considering different aspects including MVP play from Christian Yelich, a historic rivalry game, and fantastic postseason success, I would say this season was ultimately a success. This season set the stage for multiple postseason appearances in the future and created a winning culture in Milwaukee. This season was an important step for the Milwaukee Brewers franchise as it set the stage for future years to come. 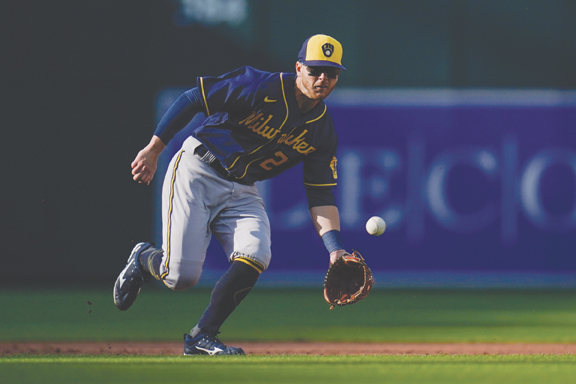 This moment was crucial for Milwaukee as they needed a lead in order to secure their first victory of the season. Especially in a rivalry game, every game matters and more specifically getting the first win of the season was necessary from a moral standpoint. Mike Brosseau was finally able to live his childhood dreams and hit a go ahead home run at Wrigley Field. This was a moment that will never be forgotten for Mike Brosseau and is one of his greatest moments throughout his young career. Brewers fans were very grateful for the go ahead home run and it will be one of the defining moments throughout the 2022 season for the Milwaukee Brewers. Hopefully this moment will spark many future victories for the Milwaukee Brewers and give Mike Brosseau the confidence to hit well at any ballpark. 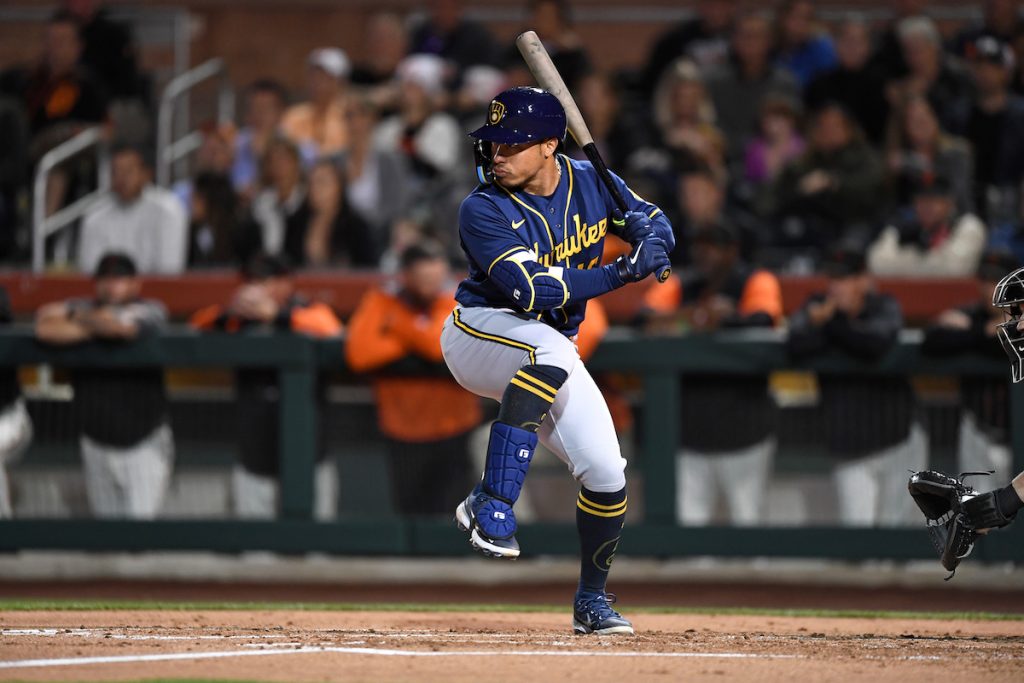 With the 2022 season underway, I figured I would show my statistical predictions for the two time Gold Glove award winner, Kolten Wong. There are three statistical metrics that I will use to showcase impact which includes batting average, hits, and steals. These numbers will be based on the assumption that Kolten Wong is healthy and getting regular at-bats throughout the 2022 MLB season. With that being said, I predict Kolten to have an astounding season. While he has always been a great defensive player, I will focus on his offensive impact.

Kolten Wong is regarded as one of the best defensive fielders at the second base position but his offensive performances are criminally underrated. He has been a consistently solid leadoff hitter for Milwaukee and continues to prove his worth offensively every ballgame. In 2022, I expect Kolten Wong to possess a .268 batting average, 114 base hits, and 14 stolen bases. This would be considered a solid season for Kolten Wong and I fully expect him to reach these numbers and potentially play better than expected. After watching him when he played in St. Louis and then seeing his performance in Milwaukee, it’s easy to see that he has All-Star potential and hopefully will make that leap this year. 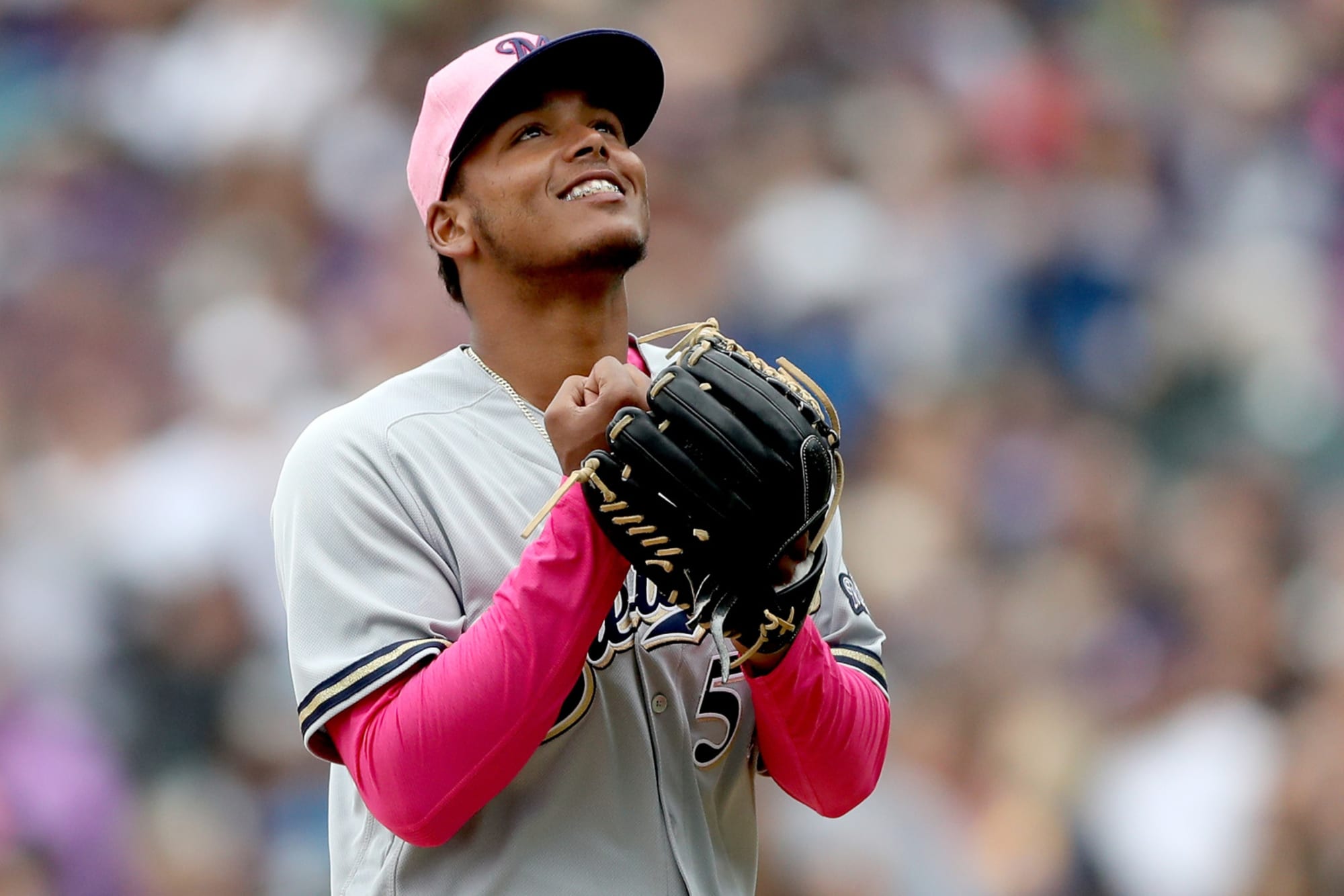 Freddy Peralta, aka Fastball Freddy as many fans call him, had a fantastic 2021 season including his first ever All-Star appearance. While he was incredible in 2021, it may be hard to reach similar numbers and production that he put on in 2021. I will give my predictions for his performance throughout the 2022 season barring any potential injuries. I will use three statistics to test his measured performance throughout next season including ERA, Earned Runs Average, Strikeouts, and Home Runs Allowed.

Freddy Peralta is an All-Star caliber talent and could very much play beyond expectations for this upcoming 2022 season. As stated earlier, I predict Freddy to possess a 3.25 ERA, Earned Runs Average, with 215 strikeouts while giving up 17 total home runs throughout the season. Freddy Peralta signed a contract that has him playing in Milwaukee for four more seasons, which will hopefully result in more winning success and bring the Brewers back into the MLB playoffs. I hope for Freddy to have an even better season than his 2021 season which could result in another All-Star appearance. 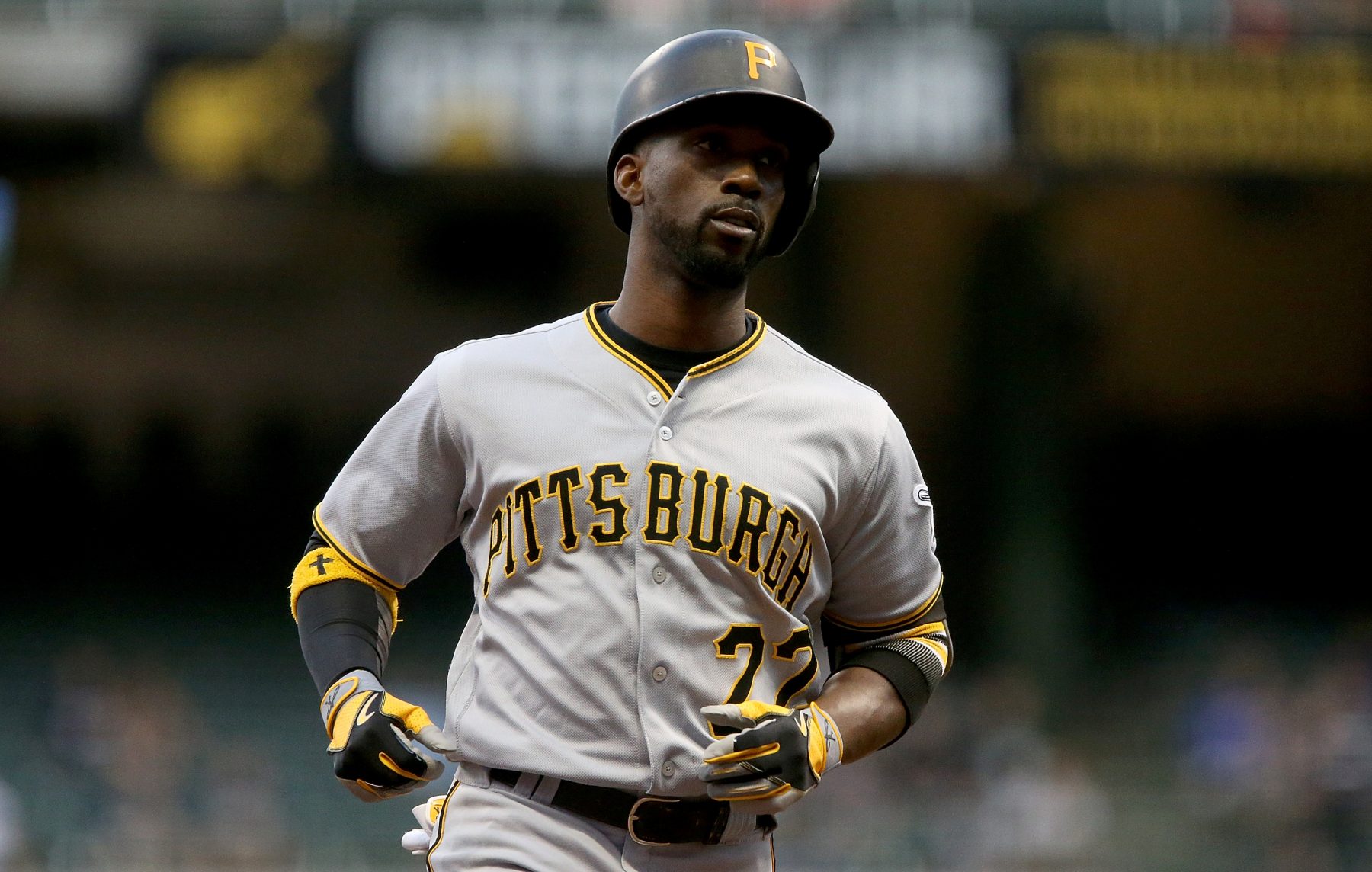 This acquisition will provide great efforts for the Milwaukee Brewers as he is able to be a great hitter against left handed pitchers, bring in a veteran presence, and has prior experience hitting well in Milwaukee. While I don’t think Andrew McCutchen will be the best player, he will definitely play a solid role in Milwaukee and should help the Brewers win some crucial ball games later in the season. I expect McCutchen to fit in nicely with the ballclub and understand what it takes to win postseason games. Overall, I like this signing as it brings in more depth which is important when playing a 162 game season and will bring in important attributes that are much needed for the Brewers ballclub. 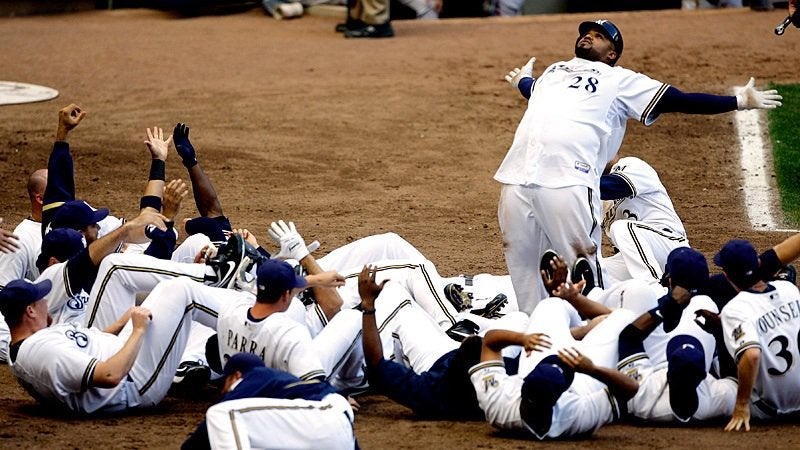 One of the greatest seasons from any Milwaukee Brewers team was the 2011 MLB season. This season was the year that I started watching Brewers baseball and still standouts as some of the best baseball I have ever watched. This season consisted of great team chemistry along with the franchise’s first division title since moving to the National League. In this article, I will highlight the dynamic duo consisting of Ryan Braun and Prince Fielder, the phenomenal pitching staff, and the greatest walk off hit in franchise history.

The 2011 season is a season that will go down in history as one of the biggest “what ifs” as they ended up losing in the NLCS to the St. Louis Cardinals. While it didn’t end in a World Series appearance, it was still very much a successful season. From having elite hitters to spectacular pitching performances, the Milwaukee Brewers were able to win the National League Central division for the first time since joining the National League in 1998. This season will always hold a special place in my heart and has given fans hope for many years to come. 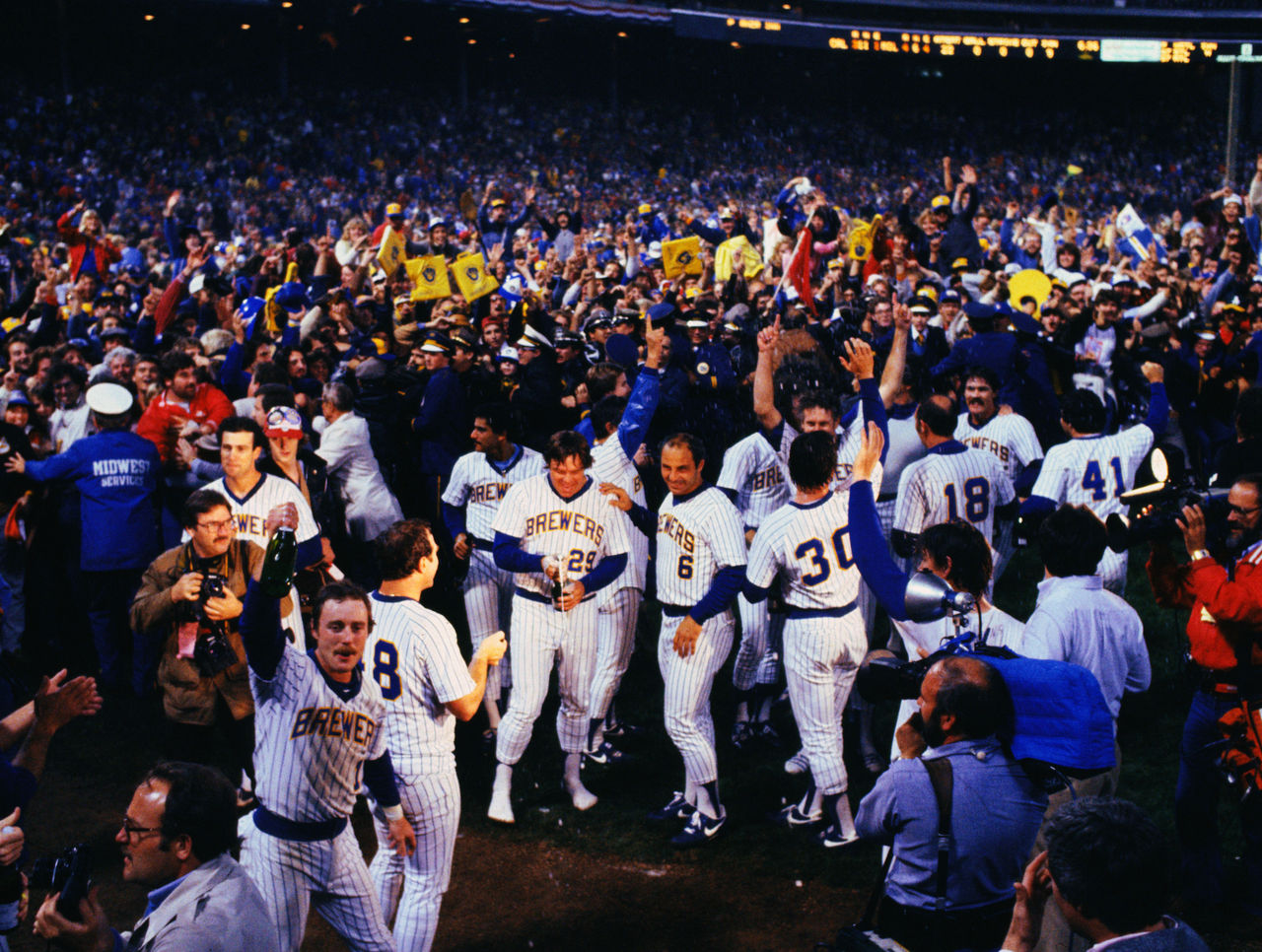 The Milwaukee Brewers are a newer franchise within Major League Baseball and don’t possess many historic seasons. While they are new, the 1982 MLB season was very memorable for Brewer’s fans all across the United States. This was the season where the Milwaukee Brewers made the World Series, which is the championship in Major League Baseball. After a season where they fell short in the playoffs, they finally made it to the biggest stage in all of baseball. In this article, I will highlight the leader of this ballclub, the elite offense, and the ending result of this season.

The 1982 season was a season that many Brewer’s fans will remember as it will go down as the best season in franchise history up to this day. This season consisted of elite play from top tier players, offensive greatness, a cool slogan for the team and so much more. While I wasn’t there to witness this season as I was yet to be born, I have seen highlights and heard from fans who were there to witness and it is regarded as a fond memory all across the state of Wisconsin. 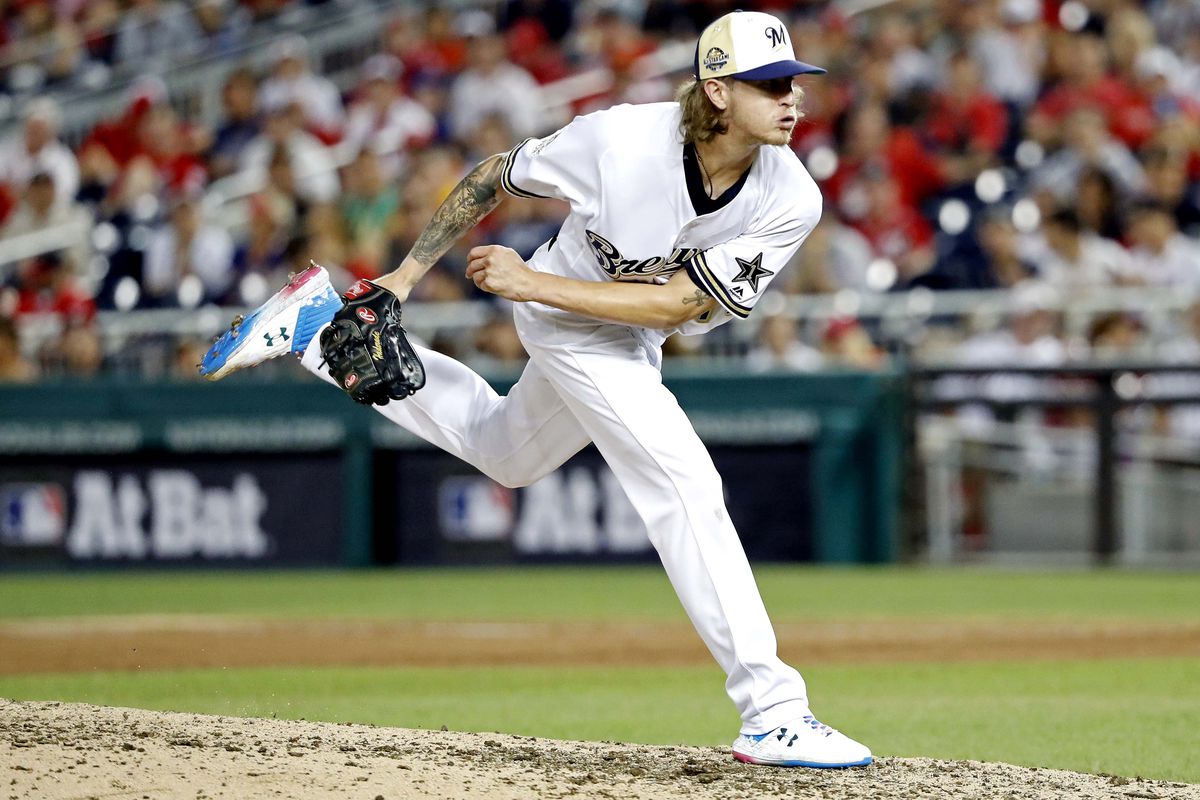 The most reliable pitcher for the Milwaukee Brewers within the last five years has been Josh Hader. Since making his debut in 2017, Hader has made his presence well known not only among Milwaukee Brewers fans but MLB fans as well. Josh Hader has made the All Star game three times in his career and has won the National League Reliever of the Year award three different times. This award is given to the best relief pitcher in the National League that season and Hader has done that three times in his career. He added his third Reliever of the Year award in the 2021 season. This article will break down Josh Hader’s phenomenal season by showcasing three different metrics including ERA, or Earned run average, saves, and strikeouts.

Josh Hader had an incredible 2021 season that will go down as one of the greatest seasons by a relief pitcher ever in the game of baseball. With the incredible numbers revolving around ERA, saves and strikeouts, Hader was able to dominate opposing hitters and make it a nightmare to face off against him. Josh Hader had the best season of his short career and hopefully will continue to scare hitters in Milwaukee for a long time. 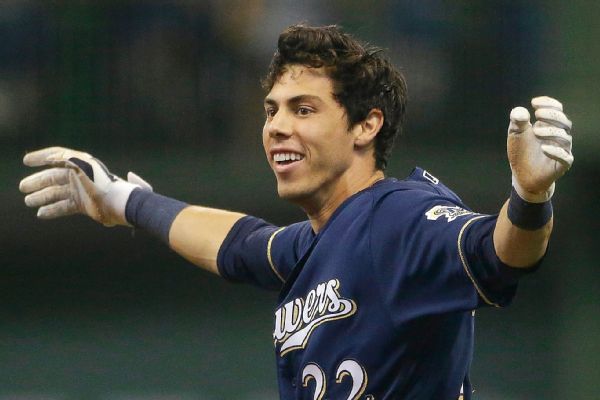 The star of the Milwaukee Brewers, Christian Yelich, has gone through many ups and downs during his career. This article will go in-depth into the season that Christian Yelich most recently had and will highlight statistical references to showcase this season. Specifically, I will highlight three statistics to showcase his performance compared to an average player including batting average(BA), runs batted in(RBIS), and On-Base Percentage(OBP).

Through these statistics, we can see that Christian Yelich had an above average season but didn’t showcase anything spectacular considering the situation that he is currently in. After having years we he possessed .326/.329 BA and 110/97 RBIs and .402/.429 OBP, it isn’t impressive to see the numbers he put up in the 2021 season. I hope to see a much better season from Christian Yelich in the years to come.